A call to public!

A benevolent tears from fellow Christians!

A call for prayers.

When me and my husband were on our way back to Singapore from my Penang consulting assignment, I decided to get a Time magazine for April 21, 2014 issue. In the flight I was digesting the reason why I bought the magazine: 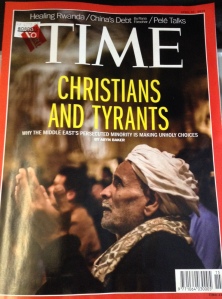 I immediately flicked my fingers to the article that caught my attention. And sure enough, I can’t help not to be teary when I started to read the article. Our Christian brothers and sisters in northern Syria are on utmost distress. Faith, which is supposed to give comfort to the human soul are now tormenting them. For them, being a Christian would require paying 650 Syrian pounds as protection (Baker 2014). It can only be equivalent to USD 4, but when there is no stable economic resources, even this can be tantamount to huge amount for people living in the war zone. If they cannot pay, it can only mean conversion to Islam or face the consequences through the sword (Ibid.). While a number of Christian population have fled the region, those who were left behind are facing the fear of giving their lives or an ‘exodus’ of their faith when the economic tides are low. I often ponder,

Just how deep is our Christian faith that we’re willing to give our lives and die for Christianity?

How far would you go?

Here’s a call for prayers. A call for all denominations of Christianity. Roman Catholics. Eastern and Oriental Orthodox. Protestants. Anglicans. Pentecostals. Independent Churches. And all other denominations that I haven’t name due to my limited knowledge of Christian study and history.

Islam is a religion of peace. It’s only when human take matters into their hands through a twisted ideology and hunger for power comes the extreme group which aims to justify the use of violent Jihad. Requesting our Muslim friends to help us pray that Christian lives in Syria would be spared from monetary obligations and tyranny.

This blog is pledged to the Singapore Memory Project

Thanks very much for dropping by.

Error: Twitter did not respond. Please wait a few minutes and refresh this page.